Who Is The Real Poor 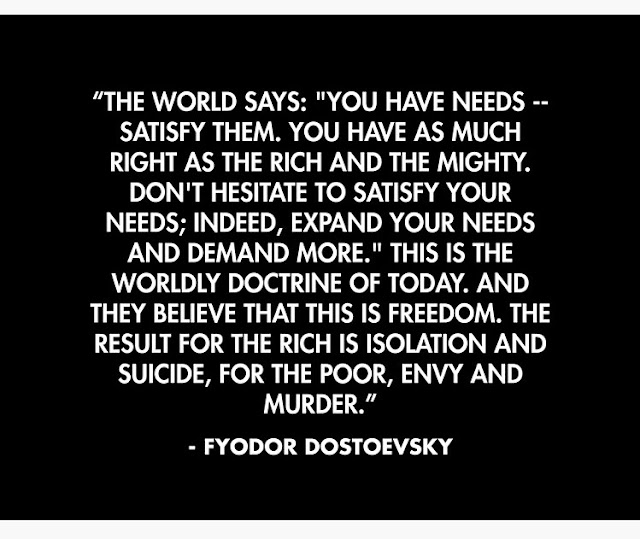 We often link being poor to not having sufficient funds, being late on paying your bills, or not having enough money to buy luxurious and unnecessary products, but is this the real definition for being poor?

I'll tell you who exactly is poor, and I'll prove that it has nothing to do with money.If two people saw a Ferrari passing by, it's really attractive and it attracts everyone's attention and focus, also it's customized and its color is really adorable.So both of them looked at the car as it passed, and they both didn't have enough money to buy it.So one of them was so near to banging his head to the walls,he really desired a similar car,he've always wished for it and it has been one of his dreams to get a luxurious car,he imagined if he was at the car owner's place.He imagined if he was holding the steering wheel right now, and if he could go anywhere he wants with, and people would look at him and envy him for what he had, they may even try to be so friendly and to get to know me because they know for sure that I'm wealthy.He went on and on imagining then he was shocked again by the fact that he doesn't even own 1/50 of its price, he even has a student loan he doesn't know how to pay off.So this man felt disabled because he desired this car so much, he put all his dreams and focus into it, and his disability towards buying such a car is what made him poor because he wants to buy it but he can't do so.The other one which was wiser knew that if he had this car his life won't be empty of problems, he knew that the car's owner doesn't necessarily have a better life and it could be the exact opposite, he could have lacked so many other things which are more important like friends, family, and satisfaction.He knows very well that there isn't any product that could make a person's life better, it could only add pleasure and it won't last forever, we humans get used so fast to new situations.He knew that if people wanted to be around just because he is wealthy, so they're just obviously fake people who are pretending to live him for their own benefit, and who needs such people?He knew that maybe it's good to have one, but it doesn't deserve to beat himself over it, doesn't deserve to forget all other blessings and remember things he lacked, as no one ever has everything.He knew that happiness in life is all about satisfaction and perspective, and he was satisfied and grateful for what he had, and his mind he lacked nothing.That is why even tho he had no money to buy a Ferrari, he wasn't poor towards it, because he didn't desire it, he felt that it's maybe good to have one but it's far away than necessary and that a Toyota and a Ferrari would get you to the same destination.That is why Fyodor Dostoevsky said:
"The world says: "you have needs --  satisfy them. You have as much right as the rich and the mighty. Don't hesitate to satisfy your needs; indeed, expand your needs and demand more." This is the worldly doctrine of today. And they believe that this is freedom. The result for the rich is isolation and suicide, for the poor, envy and murder.”
― Fyodor Dostoyevsky, The Brothers KaramazovNow you are hopefully convinced that being poor has more to do with desire than money itself, and the rich could barely afford 3 meals a day while the poor might be a millionaire, but he still desires things that he can't afford.
Being poor is being needy to something that you can't afford, and you overestimate its role in your life because you can't afford itHope this wasn't long enough for you to get bored or leave, and I really wish that it was helpful, and I wish you all happiness and fulfillment in this world, hope I could see you here soon.Brought to you with love by