How Does One Recover From Failure? 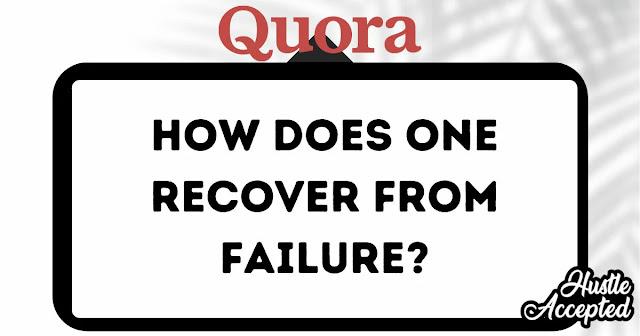 I’ll tell you how but bear with me.

If I were to fund a business idea, and two people came to me, the two of them had NEVER made a successful business.

The first one has tried making multiple businesses before but every time he failed at some point.

The second one has never tried making any kind of business but is claiming that he will succeed from his first trial.

Which one would you think I’ll choose?

Exactly, I’d with no doubt choose the one who tried multiple times and failed every time, because every time he learns something new, every time he supposedly gets to know what made him fail, also because as Winston Churchill suggested:

The fact that you are still keen on succeeding even tho you’ve had many failures proves you are a success, because that is literally the definition of success, Success is never giving up.

So, here are some steps:

1-Reflect on your past experiences, try to figure out why exactly you have failed in each time.
2-Be fully aware that it’s failures that teaches us and not the opposite, because success is a result of failing over and over till you get it right, unlike failing which is a learning process.
3-Know that you are way ahead of people who still didn’t try!
4-Know that you’re not in a hurry, you still have time to succeed, and the past experiences will serve as boosters if you really go 100% in this time.
5-Think of the past experiences as lessons only, not as a destiny.

Believe me, everyone wants to be successful till they have their first failure, the fact that you failed and still you are searching for success, makes me 100% sure you’re destined to success.

"One day, in retrospect, the years of struggle will strike you as the most beautiful"

You’d love these years you struggled at, because you’d be sure it was the reason behind your success.