The Power Of A 1% Change 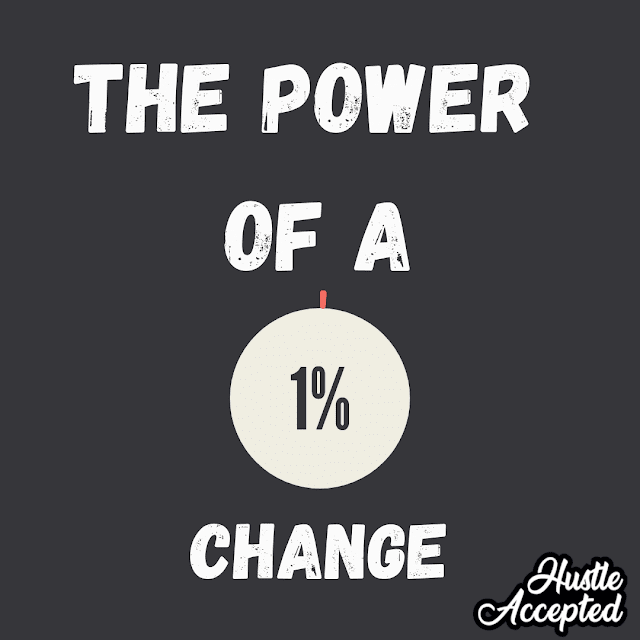 The brilliant author: "James Clear" revealed the power of habits and small winnings In his famous book "Atomic Habits," and it's one of the most popular books that talk about the impact of habits on our life.

The author started the book with a great inspirational story about The British Cycling Team. At this time in 1908, their performance was awful, they didn't win except a single gold medal, and in the most crucial race that takes place in France, no one of them has won a single medal for 110 consecutive years.
Their performance was poor, that one of the most significant manufacturers didn't want to sell their bicycles to this team, so it didn't harm their brand image. Can you imagine how bad their position was?

All of this changed in 2003 when they hired "Dave Brailsford" as their performance manager for this team.

What made Dave an outstanding manager is a strategy that he pointed out as "The aggregation of marginal gains," which was a philosophy based on making a tiny improvement in everything you do. Dave says about this strategy:

"The whole principle came from the idea that if you broke down everything you could think of that goes into riding a bike, and then improve it by 1% ; you will get a significant increase when you put them all together."

Brailsford and his coaches began by making small adjustments you might expect from a professional cycling team.

They redesigned the bike seats to make them more comfortable and rubbed alcohol on the tires for a better grip.

They asked riders to wear electrically heated shorts to maintain ideal muscle temperature while riding and used biofeedback sensors to monitor how each athlete responded to a particular workout.
The team tested various fabrics in a wind tunnel and had their outdoor riders switch to indoor racing suits, which proved to be lighter and more aerodynamic.

But they didn't stop there. Brailsford and his team continued to find 1 percent improvements in overlooked and unexpected areas.

They tested different types of massage gels to see which one led to the fastest muscle recovery. They hired a surgeon to teach each rider the best way to wash their hands to reduce the chances of catching a cold.

They determined the type of pillow and mattress that led to the best night'ssleep for each rider.

They even painted the inside of the team truck white, which helped them spot little bits of dust that would normallyslip by unnoticed but could degrade the performance of the finely tuned bikes.

As these and hundreds of other small improvements accumulated, the results came faster than anyone could have imagined.

Just five years after Brailsford took over, the British Cycling team dominated the road and track cycling events at the 2008 OlympicGames in Beijing, where they won an astounding 60 percent of thegold medals are available.

Four years later, when the Olympic Games came to London, the Brits raised the bar as they set nine Olympic records and seven world records.

That same year, Bradley Wiggins became the first British cyclist to win the Tour de France. The next year, his teammate Chris Froomewon the race, and he would go on to win again in 2015, 2016, and 2017, giving the British team five Tour de France victories in six years.During the ten-year span from 2007 to 2017, British cyclists won 178 world championships and sixty-six Olympic or Paralympic goldmedals and captured five Tour de France victories in what is widely regarded as the most successful run in cycling history.

How does this happen? How does a team of previously ordinary athletes transform into world champions with tiny changes that, at the first glance, would seem to make a modest difference at best? Why dosmall improvements accumulate into such remarkable results, and how can you replicate this approach in your own life?

It is so easy to overestimate the importance of one defining moment and underestimate the value of making small improvements on a daily basis.

Too often, we convince ourselves that massive success requires massive action. Whether it is losing weight, building a business, writing a book, winning a championship, or achieving any other goal,we put pressure on ourselves to make some earth-shattering improvements that everyone will talk about.

Meanwhile, improving by 1 percent isn't particularly notable— sometimes it isn't even noticeable—but it can be far more meaningful, especially in the long run.

The difference a tiny improvement can make over time is astounding. Here's how the math works out: 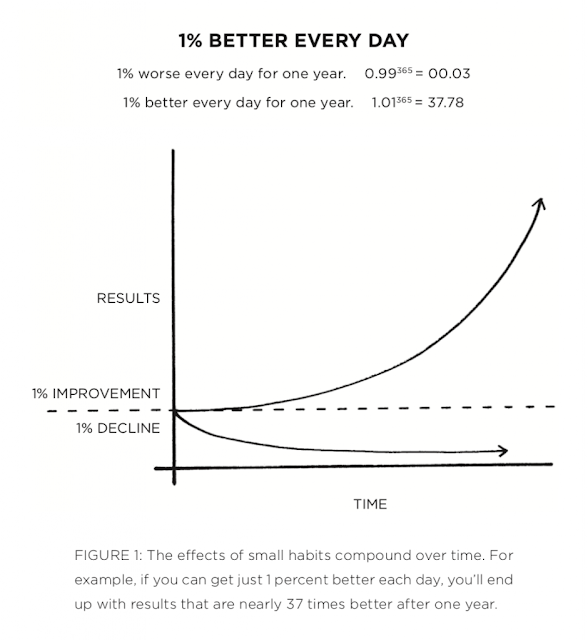 What starts as a small win or a minor setback accumulates into something much more.

That is perfectly the power of habits and the impact of small consistent wins that James Clear wrote this book to discuss, and it's great that you now have a better idea of how it works, but remains the most important part of the process, to apply what you've learned.

Stick with small consistent winnings and I promise you with guaranteed massive successes in the long run; just do it every day even if you can't see any changes initially; it will have the most significant impact soon.